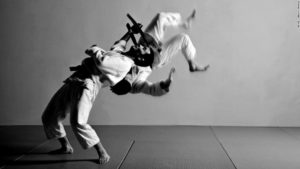 The final aspect of our focus on controls in a situation is the attacker. We address that in the physical process of what is easiest for us. First ourselves, our dimensions and then ours in relation to the environment, the attack and eventually the attacker. However, with consideration to physical ranges of being at; out of reach range, a reachable range, a striking range and finally a securing/controlling range (Note: we describe these ranges/dimensions a little differently in training but I’m describing them in this article more laymen terms.) we could in fact execute attitudes and actions that could easily control the attacker momentarily long before a physical attack was present.

Depending on the situation, the way we establish a posture, the attitude we express, the awareness and confidence levels we present all may discourage a potential attacker from choosing us to victimize. Conversely the opposite may hold true. Each may in fact encourage the attacker to choose us. This is also an aspect of our training that we address.

We also want to address a spatial aspect of controlling our opponent that we call “Knocking Out of Time.” Let’s jump down another rabbit hole and I will attempt to describe. Have you ever been talking to someone and they interrupted with something that caught your attention? Suddenly you couldn’t remember what you were going to say. It’s basically like that. In the attacker’s mind is a timeline of events that are going to occur or what I like to call “their movie.” This is what happens, when you act in a way contrary to “their movie” and inflict pain simultaneously it disrupts “their movie” and they have to either search for where they were or start a new movie. Either way, it “Knocks them Out of Time” and then puts time in your favor. Gets you ahead (in control) and allows for you more favorable choices for further contending with the situation/attacker.

It is important to consider that continued control of the attacker has limitations unless you render the attacker with the inability to act or unconscious. Both of which require a level of commitment that you are prepared to go to despite what you initially consider to be the level of threat.

Ultimately, we shouldn’t attempt to have total control of another individual beyond the given situation. In my opinion that is not nature’s design nor is it morally ethical. With that stated, it should be totally unacceptable for them to attempt to control or harm us and it is up to each of us to enforce it.

We will call you back!