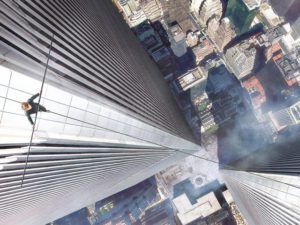 The common term for a process of considering how many mistakes you can make and still be able to achieve something is recognized as “Margins for Error.” Although this is a recognizable phrase I thought it has a negative view point. Kind of like “Devil in the Details” which is commonly used today and was coined by Richard Mayne’s explanation of the workings of the European Union – The Community of Europe, 1963. It was attributed to Ludwig Mies Van Der Rohe who apparently altered the phrase “God is in the Detail.” Mayne felt using the term Devil would capture the attention of more readers.

I felt having students focus on accounting for mistake just didn’t seem right. So I started focusing on how to explain the principles in a way that would set up the student for success. Instead of saying “Let’s anchor your elbows to prevent strikes to you ribs.” I would focus on “let’s improve the coverage of your guard by anchoring your elbows.” Technically they are both correct but sort of the “Glass Half Full” Attitude.

It was really different to start listening to how I taught.

Repeating phrases that I had been taught and seemed natural for years suddenly became new. By inverting them towards a positive outlook for improvement, teaching phrases seemed to become more powerful and students seemed to resonate with them more as I rephrased them to the other side of the coin. Although pointing out how if they do x, it would reduce the opportunity of y. I began looking into not so much how it limited the opponents actions (which it can) I would introduce principles on how it would improve the student and their motions.

After I see them improving by focusing on themselves, I then would start to point out how they limit the effects of their opponents actions. Again, reinforcing the controlling of themselves initially (See Day 13 Controlling Yourself.) and internalizing the principle allows them the opportunity to then focus outwardly.

This process/understanding then led me to teaching actions through more of a bell curves. Ideally when working on a basic and its application at a specific time with a specific event we can seek the optimum of expression. This is the point that all expressed and identified principles align to allow for maximum effect again with minimal effort However, slight deviations from that optimum expression still allow for measurable success. Anything outside that area minimizes the effectiveness and reduces any chance for success. 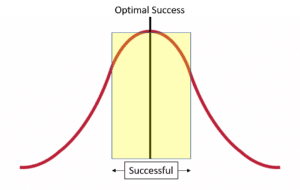 For example: If we take the basic punch. We know that the optimum effectiveness of this action is when impact is just at the 75% range of extension. It is at this point that body alignment and speed of action culminate for maximum effect. If we strike within a reasonable percentage before or after that range we still have a level of success. However there is some point at the beginning of a punch it is relatively ineffective thus the reason we jam a punch. Also, if we can over extend the punch it becomes in effective as it loses momentum and back up mass. So understanding this allows us to focus on insuring our actions allow for this range and we minimize our opponent’s ability to take advantage of this range.

In all our ACTIONS we want to identify what we define as successful (again recognizing that the optimal would be achieving the most success possible with the least amount of effort) and then focus on the aspects that will insure that success.