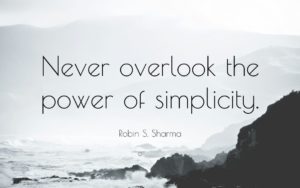 There is this unique beauty to the moves and interactions that the Martial Arts is known for. Countless shows and movies have sensationalized some of the skills and abilities that training can introduce and develop.

Not that the executing the moves seen in the movies with flawless execution are impossible it is just that in a real life situation it is more improbable. Interestingly enough though it is due more to the seriousness of the encounter than it is of the skills and abilities of the Martial Artist. As a process of self-preservation our minds will seek out the simplest of solutions. As we stated in a recent Gathering theme it’s “Simplicity under pressure!” For our training we recognize that simplicity denotes the freedom from hardship, effort and confusion.

As a standard awareness of skill development, when we are overwhelmed we will gravitate to gross motor skills. This is partially due to the fact that we develop them prior to fine motor skills and when under pressure or stress we trigger the sympathetic nervous system — a division of the nervous system responsible for the fight-or-flight response — which gives the adrenal gland a nudge, encouraging it to release a dose of epinephrine into the bloodstream. (Medical News Today)

The rush of blood is absorbed by the larger muscle groups fueling them for action over the finer muscle groups dedicated to more intricate activities. Making the fact that we are going to tend to execute simpler moves due to our physiological make up.

Additionally, mentally there is a tendency for us to lean towards Occum’s Razor which states that of any given set of explanations for an event occurring, the simplest one is most likely the correct one. In any given situation the simplest response is most likely the correct choice. In our training we work to reinforce this belief and behavior. It’s not that we don’t work on sophisticated solutions, we do. As we grow and improve- what we originally used as a skill set is replaced with a more effective skill set. Although initially we may have not had the coordination to execute- overtime it becomes simpler and the new “norm.” We are do not choose complex actions. We use sophisticated actions. “Sophistication is simplicity compounded.” ~Ed Parker.

An important improvement to how we train is the introduction by Mr. Hancock to “Master Keys.” In this process we look to recognize that many actions can be reduced to a simple core move. It’s the core move that we focus the majority of training reps to the core move and then focus a minority of reps on the specific aspects that define the said action. Using “Master Keys” fulfills the definition of simplicity as having the freedom from confusion. We can reduce several potential choices to confidently focus on a single option.