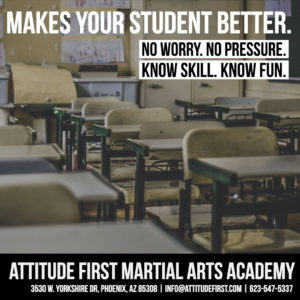 Attending any kindergarten through college-level school for many of today’s students is a difficult endeavor. They enter a chaotic environment that is filled with different expectations and influences coming from their parents, teachers, and/or peers. Obviously, they have their own interests and desires, but at the same time, to please others is a driving force. Peer pressure has the possibility to send them down the wrong path because they want to be accepted and recognized by their peers.

As the student progresses through the grades, they start feeling the expectations of life descend upon them.

They don’t know how to be strong within themselves to say “no”, “yes”, or even to state their case.  They don’t know that they can defend themselves. They don’t have an outlet that allows them to just be their original self, and they need one!

Recent studies reveal that the mind needs physical activity so to run at optimum efficiency.  In other words, the brain & body need to be exercised together, need to be challenged together so the student can achieve even more!

In another study2 it was revealed that “Physical activity and sports are generally promoted for their positive effect on children’s physical health; regular participation in physical activity in childhood is associated with a decreased cardiovascular risk in youth and adulthood.”  It also states, “Physical activity has beneficial effects on several mental health outcomes, including health-related quality of life and better mood states.”

There is no doubt that activities that involve the brain and the body will help the student in their academic careers.  But regular school just isn’t giving that physical option anymore. For whatever reason, be it cost, time, or curriculum, the student is suffering because of it.  The student needs to have a physical outlet. They need to have a place that lets them get not only their minds working but also their bodies.

That is where a great martial arts academy comes in, they break the mold! They leverage their decades of experience to help every student that walks in the door by exercising their minds and their bodies. They want the student to take what they learn on the training mat out into their daily lives. The student learns through mental and physical exercise how to improve awareness, employ appropriate attitudes, apply logical choices, determines actions that give them margins for success, and all while keeping their choices simple and refined. In other words, they don’t struggle with issues because they learn to recognize the simple aspects of problems and solve them systematically with a sense of ease.

Take for example, Keiric S., who trains at Attitude First Martial Arts for about two years now. He has always been pretty self-motivated. However, until he joined Attitude First, Keiric’s efforts were all over the place. He knew he wanted to be active, but he didn’t know how to focus that activity in a way that truly helped him grow in any area. That’s where the instructors at Attitude First really helped him. Through the time spent with Mr. Robinson, Mr. Joel, and other instructors and more advanced students, Keiric has learned the value of planning and focus. He has gained discipline in every area, and he has become much more physically fit. Keiric has also become much more comfortable being who he really is, even in a time of early adolescence, when fitting in can seem incredibly important. He is willing to stand up for what he knows is right, even if he is the only one doing so, and a great deal of the confidence he has to do this comes the physical and mental training received from Attitude First.

So, help your student by breaking the mold.  Get them to be not only mentally active, but also physically active. Show them that that you believe that a healthful lifestyle can be advantageous and that there are no limitations to what they can accomplish!  Your student is worth it!!

Since 1981, Attitude First Martial Arts Academy has encouraged kids and adults alike to develop confidence, courage, and commitment to defend themselves, their hopes, and their dreams. They have developed and implemented programs that directly address a person’s self-esteem, confidence, and decision-making skills using the martial arts as their basis.

Attitude First is highly experienced in guiding the development of their member’s skills necessary to be successful in today’s world using the Martial Arts as the vehicle. Their training process helps develop confidence, so they can be successful in any environment. We help them find courage to navigate this new and chaotic world and encourage them to invoke self-discipline to achieving goals. Most importantly, they learn that they do have choices and should not be a victim of those who want to distract them from their goals.