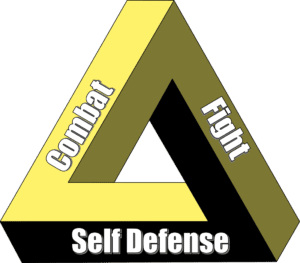 Often times when one is considering training self-protection there is a variety of potential levels of conflict that can be envisioned. Thoughts range from dealing with a common bully, to being attacked by a masked robber, to fighting through an army of bad guys, etc. This continuum of escalating intensity that we imagine is often times the same situations that are professed in Martial Arts schools across the nation.

Even though the odds of these dramatic aspects becoming a reality are minimal, important defensive techniques can be introduced, trained and developed. Unfortunately often times, the true value of the lesson can get lost in the simulations. This can be due to the practitioner’s need and potentially the instructor’s need to establish an emotional connection to the drama. This need sadly can lead to giving everyone involved a false sense of importance. The value of the lesson is diminished and the value of the drama heightened.
In our training at Attitude First, we recognize there is an overlapping continuum of interactions between you and an opponent(s) that we will recognize as self-defense, fighting and combat.

For this context, this is how we will identify them:

Self-Defense– “Stop Them”- In self-defense you have a primary objective-To not be harmed! Whether that is physically, emotional, mentally or spiritually, your goal is to stop someone from harming you. Because of the different aspects of these areas- the tactics used to solve them could run the full gambit of running away, to body language, intonation, and/or striking your opponent.
We often describe to students that there are 2 actions in self-defense- Your action and their resulting action. The best case scenario; “You hit them! They hit the ground!” The key thing to note is that every choice you make in the concept of self-defense is to “Stop Them” from harming you. There is rarely the intent to injure them however, the action chosen to stop them could in fact, hurt them. Again, ideally that was not the intent. If I throw a ball for you to catch and if you miss it, the ball then inadvertently strikes you in the face. The result unfortunately was a broken nose. Again, that was never the intent. It was merely the result of the action.

Fight– “Win Them”- In Fight there is a “consented” or acceptable exchange. It is also governed by a set of “rules.” Those rules may be literal, as in a competitive event or societal/cultural as in “gentleman’s rule” and ultimately legal, where assault/battery offenses may be the end result. The primary phrase that establishes the term “fight” again is some level of mutual consent. Also, there is a recognizable end point; both parties agree to end, a time frame or other aspect of the event has ended thus stopping the fight, one individual is incapable of continuing, it is ended by outside authorities, etc. The key is there is some sort of recognized stop and each participant is recognized for their level of participation. The actual winner may sometimes be subjective to interpretation but usually a winner is recognized. Even if it is each participant’s group of friends patting them on the back telling them they out did the other.

Combat– “End Them” In Combat there is one objective- “End this NOW” and insure your survival regardless of theirs. The situation may have started at Self-Defense then evolved to a Fight. However, it has now morphed to a scenario in which just stopping them is not enough, as they won’t stop. Now it is not only critical that you win, but that you survive. Additionally, there is no consent to exchange, or no sense of rules, There is no regard for cultural or legal consequences. Combat could take as little as seconds or as long as several minutes, potentially even longer. You have the heightened awareness that survival is inevitable and that it is up to you to survive. The intent of every choice, every action, is to end the confrontation even if it requires ending your opponent(s) with whatever method required.

It is important to understand that in any given training scenario whether it be with the intent of either self-defense, fight or combat there is an overall influence- All participants have corrupted the outcome. Everyone involved recognizes the underlying expectations and each participant has a measured level of personal investment. Rarely are they fully committed and willing to risk lifelong injury. Protective equipment and safety measures are usually established which ultimately streamlines results to a more predictable outcome. Also, these measures influence and allow for a known response. Attackers and defenders minimize a true response, because accounting for pain and injury their intensity is minimized to match their personal investment. The attitudes of all participants are influenced by the known aspect of the scenario. In addition there is an outside authority that can end the scenario at any given moment. If something has gone wrong and is outside the perceived intentions, the scenario can be, and is, normally halted.

Regardless of being successful or failing we can’t truly train for a repeatable determined outcome as nuances and variances can’t be established. In other words, if given for true spontaneity of a realistic encounter, there rarely would be repeatable events. There truly are too many “unknowns.” Therefore, we need to recognize that there is more of a “bell curve” with acceptable levels of outcome. It would not be a black and white/pass or fail.

The belief that in any encounter that we would come out unscathed is highly unrealistic. Even in what we define as self-defense in which we state that “You hit them! They hit the ground!” there is opportunity for injury to ourselves. However, even if we were injured, if the final outcome was they were stopped and we were able to walk away, this would be considered a success. Maybe not at the level we had hoped for, but a success nonetheless.

This does not mean that the training scenarios are not useful. Truly this is the contrary. It is just important to recognize that it is merely training. A successful completion is not the absolute outcome every time. Working the scenarios helps to develop experience. Think of it like a trained stunt driver. In their profession they make incredible stunts in which every aspect is accounted for. They plan, review, test, etc. Yes, they edit together the more successful aspects to create an exciting array of actions. We don’t see all the failures.

Working through self-defense patterns, sparring with partners, rolling on the mat, fighting with protective weapons, etc., all have an important place in the development and preparation of the Martial Artist. They give important opportunities to plan, review, and test skills. The experiences help train us for recognizable moments. The intensity of the training experience can and should be increased or minimized to allow for true skill development. The scenario and it’s drama should be identified as just an exercise and not overshadow the intent of the training. We are seeking the results that the exercise developed, not necessarily the completion of the exercise.

It’s not completing a marathon race that was the true value even though it is a significant accomplishment. It is the training and development, the lifestyle, the increased muscle response, the improved strength, the health and vitality, etc. that preparing for it offered. As we progress through the Martial Arts and “rank” we need to experience self-defense, fighting and combat scenarios in our training process because it is the range of experiences that help mold who we are to become and simultaneously arm us with skills that will govern our responses in any potential conflict.